So before I left Japan I went on a trip to the Kansai region of Japan. The Kansai Region is home to some of the most well known cities in Japan: Kyoto, Nara, and Osaka.

Transportation
To get to and from Kansai I decided to use the bullet train. It seemed like the fastest and most comfortable way. The ticket was a little pricy, but since I was leaving Japan soon I did not mind so much. Both ways (Tokyo to Kyoto and then Osaka to Yokohama) averaged about 13,000 yen each. The train itself was awesome. I got to ride on the Nozomi Super Express train and it was very quick and the ride itself was very smooth. I definitely reccomend riding on the bullet train at least once in your time in Japan.
Kyoto
We stayed at the Chita Guest Inn in Kyoto. It was in a very nice spot; very close to Kyoto Station and one of the biggest temples in Kyoto. It was also very close to a bus stop that allowed very easy access to all of the big sights. The owner spoke English well and was very friendly.
The first temple we visited was the Kiyomizudera Temple known for its wooden pavillion. It was a very scenic and quite impressive temple. We took a bus from Kyoto Station that was about fifteen minutes. There were also tons of touristy souvenir shops along the walk to the temple. 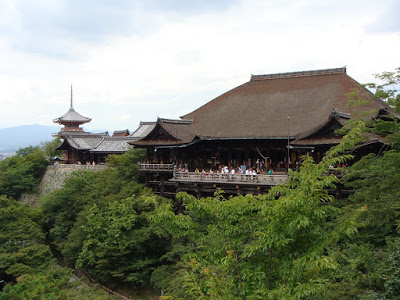 After the temple we lounged around a little until about 6pm when we headed over to the Gion Festival. The festival is one of the biggest festivals in Japan and is held in the Gion area around the Yasaka Temple. The festival was really nice. There were tons of tasty junk foods lining the streets of Gion and around the temple. There were many taditional Japanese drum performances and the environment was really nice. 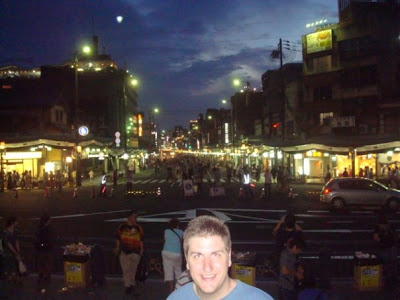 The following day we headed to the Fushimi Inari Shrine. It was a couple of stations from Kyoto. I really liked this temple. There were tons of Japanese Tori and the environment was very tranquil.

All in all Kyoto wasn’t bad. There were tons of tourists everywhere which I didn’t like, but I still definitely recommend visiting the city. It is very beautiful.

In Nara we stayed at Yougendo Guesthouse. . It wasn’t in Nara, but in Oji (a couple of stations away from Nara). Despite this, I definitely recommend staying here. The owner is British and it is a very comfortable place to stay. The rooms are beautiful and there is even a bar very close by that is operated by the owner.

Nara itself was very nice. There were tons of stuff to do outdoors and the hiking was very nice. Nara is famous for the thousands of tame deer that roam around in the park. There were many vendors/shops around selling rice crackers that you would feed the deer. It was really nice to be able to give the rice crackers to the deer and pet them. The thing is once one knew you had a rice cracker all the others started to swarm around you. 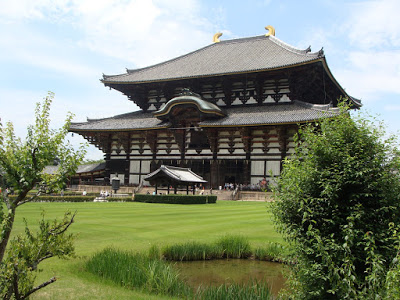 In Nara Park there were many temples. We visited the Todaiji Temple which is known for its huge Buddha Statue. The temple was gorgeous. It was very big and the architecture was just plain stunning. A picture cannot do it justice. In this temple there was also this very small crawl-hole in one of the wooden pillars. It is said that if you can crawl through it you can reach nirvana. I knew I was too big to go through it, but there were many girls/little kids that were able to go through it.

I also hiked around the mountain/hills area around Nara Park. It was a very enjoyable hike and the weather was very nice. I saw some nice views around Nara. I really liked Nara. It seems that I saw many less tourists/foreigners here than in Kyoto (especially when I hiked around a little). 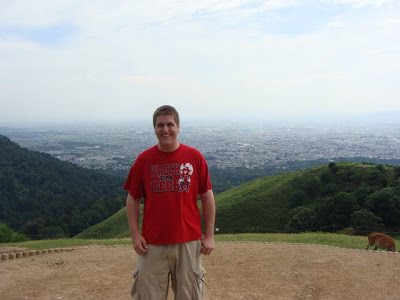 I stayed at Eko-in for one night. I looked at the best temple lodgings on TripAdvisor and decided to pick this one. We booked for one night.

When we checked in we were shown to our room and I was asked to fill out a card with all of my information. I was then explained the rules of the temple. It was explained that dinner was at 5:30pm and they would give us a call before bringing the food to our room. After a nice hot cup of green tea in our room and a bit of relaxing the monks gave us a call and asked if we were ready for dinner.

A monk brought the dinner to our room shortly after and set it up for us. It consisted of traditional Japanese cuisine that the monks eat. It was all vegetarian so don’t expect any meat or fish. I was feeling the moment and also bought a beer with my meal (700 yen for a big bottle of Asahi). The meal was really good and we had some lovely tea to go along with it. 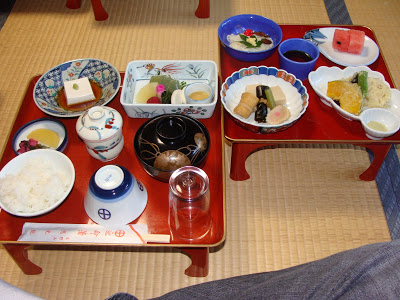 There is no bedding in the room at first. After dinner finishes the monks come and clear away your table trays. They then bring Japanese futons to your room and set everything up. The beds are futon mats with covers. Pretty much all you need.

The room itself was a traditional Japanese style tatami mat room. It had a window with two straw chairs overlooking the lovely garden. It was really relaxing. There was a TV in the room (although we never used it). There was no air conditioner so know that before going. Koya-san is actually pretty cool (even in the summer) so the fan that they provide in the room was adequate even in the peak Japanese summer.

The bath/shower is open from 4pm-10pm. It is a traditional Japanese style bath so you must be comfortable with public nudity as it may be hard to catch the shower alone. It is big enough though so you really don’t have to worry about it. The bath water is very hot and a really great way to relax after a day of hiking. All towels, soap, shampoo, and rinse is provided to you along with a Japanese Yukata (pajamas). While there were definitely monks with English ability, having some extent of Japanese linguistic skills helped. I suppose this is the same anywhere you stay in Japan though. If you don’t speak a word of Japanese don’t worry.

The location is near plenty of useful shops: a restaurant, souvenir shop, and a grocery store. It is important to note that you cannot bring food onto the temple from outside so be aware. Eko-in is also close to a major bus stop that will take you all over Koya-san.The Morning Prayer ceremony feels authentic and is a nice experience. It is very intuitive what to do and is a nice way to start the morning. There are two computers set up with high speed internet so you can check your mail or upload pictures easily.

Overall it was a nice stay. If I had to do it again I would stay for two nights and enjoy everything the mountain has to offer. We paid 12000yen for one night so we didn’t want to make it too expensive. Overall though this was definitely a worthwhile stay.Mt. Koya was really nice. There was a ton of nice hiking to do and I could have easily stayed an entire week there if I wanted to. If you like outdoors Mt Koya is definitely for you. 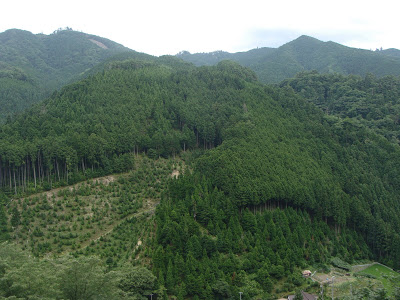 Reflections
The trip was really nice but honestly a little expensive. I am glad I went once, but next time I am back in Japan I am definitely going to go to some of the smaller and less known prefectures. I also never had a chance to make it up to Hokkaido which I definitely want to do in the future.

To be perfectly honest, just going off my brief five days in Kansai, I prefer the Kantou (Tokyo) Region a lot more than Kansai. The people seem to be a little bit more tolerant of foreigners. I just like big modern cities more than average sized towns I suppose. I liked Mt. Koya a lot because it was so small and secluded though.