The metro in Shanghai is huge and you can really go just about anywhere on it. It opens around 6am and shuts down around 11pm. As far as the actual experience- it’s hit or miss. Sometimes it is no problem (dare I say enjoyable) and not crowded at all while other times it is borderline unusable due to the crowds and pushing. Let me preface this by comparing it to the Tokyo subway. In Tokyo, the subway was definitely crowded- however the people there had decency. There was no pushing, cutting in line, and everyone waited until everyone else safely exited the train before trying to get on. Inside the subway everyone was considerate, quiet, and mindful to the fellow passengers. Even if the Tokyo metro is packed full- it’s still endurable.

In Shanghai- there are no rules. People push (violently sometimes) in order to get ahead of the line. When a train comes, instead of waiting for people to safely exit the train, people quickly try to jump on and throw people out of the way just so they can get a seat. People yell in the subway and shout at the top of their lungs on their cellphones. People cough up their lungs and spit on the floor of the train. I’ve also seen a couple of instances where parents will actually let their babies defecate on the train. Now I take the metro (Line 2 between Peoples’ Square and Jinke Rd.) every day to go to work, however my rule is that I have to ride before 7:30am or after 9:00am in order to avoid the crowd. During this time I am usually lucky enough to find a seat and blast music in my headphones while I read a book. It is the cheapest way of transport (only about 60 cents one way)- but depending on when you go it can be flat out hazardous. 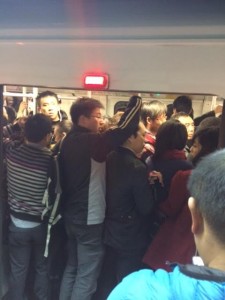 Packed train- there was so much pushing.

I’ve only taken the bus twice: once in Beijing and once when I went to Chongming Island. Since the Chongming trip was a little long distance, I consider the Beijing experience more relevant experience. It was crowded, smelly, and everyone pushed. I get the impression it is like the subway and depends when you take it, however I tend to stay away.

Normal taxis are hit or miss. Sometimes they will be perfectly fine while other times they will be a somewhat fleeting experience. My biggest beef with the taxis here is that they will often ask “Where are you going?” and deny you a ride based on that. Supposedly this is illegal, however it seems to happen to me quite often. For foreigners I suppose they just think that the chance of me actually reporting them is slim so they can discriminate based off destination. They never have functional seat belts and very rarely have any English ability. Your best chance is to have your destination printed out in large Chinese font (some of them have bad eyes for reading).

One good thing about normal taxis is that they will often know the streets a lot better than Uber drivers. Uber drivers tends to use GPS while the regular taxi drivers tend to rely on their street knowledge. They drive very aggressively (sometimes dangerously), however they always tend to know where to go. This turns into a bit of double edged sword as they will take the long way- however it still seems to be considerably cheap (especially compared to western standards) if you can catch a normal cab. For the base fare it is about $2 and slowly goes up from there.

An important thing to be careful for is what color taxi you catch. Avoid the dark red taxis at all costs as they have a terrible reputation and are normally from smaller companies. You’ll have a higher chance of getting ripped off in these and some of them don’t drive with insurance. Always make sure that the taxi uses the meter and have a general idea of how much it should cost and how far away your destination is. If you feel you are being ripped off, take a picture of the taxi/license (as well as his ID number) and get a Chinese friend to call in a complaint and get you a refund. When going to/from the airport- the taxi is the best bet, but make sure you get a legit taxi. From Peoples’ Square to Pudong Airport normally runs me about 170RMB (about $27). They do not take credit cards, but will take the Shanghai metro card that you use in the subway. When coming from the airport make sure that you go to the official taxi queue. There will be a lot of scam limo services that try to solicit you, however make sure you go to the official line in the airport. Finally, when catching a cab from the Maglev, be very careful as it is a known scam for taxis to ripoff unsuspecting foreigners who are coming from the airport.

Uber has been in China for about a year or so and is honestly one of my favorite forms of transportation. They never reject you based of destination, always have seat belts, normally have free water, and sometimes the drivers will have some degree of English communication skills. There are different levels of Uber from Uber Black (expensive, but you will get at least an Audi A6) to Peoples’ Uber (cheaper than normal taxis). The only disadvantage here is that coverage is hit or miss. Sometimes you will only have to wait for a minute or so before they pick you up while other times there will be no availability at all. Depending on the level it is considerably more expensive- however the cheapest level is on the same par (if not cheaper) than normal taxis. They have some interesting cars as well. There have been a couple of times when I had a Tesla Model S pick me up. As it tends to be a bit more expensive than normal taxis- usually the locals shy away from it. This makes availability during peak times (rain, concerts, etc.) a bit more reliable compared to normal taxis. It is all credit card based too which adds a certain level of convenience. It’s definitely worth having this app on your phone. 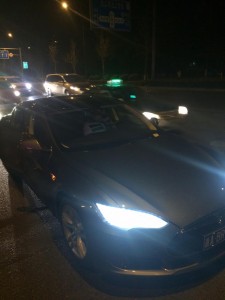 The Tesla I got from Uber

The Maglev (magnetic levitation train) is a high speed train that runs from Longyang Rd. Station to Pudong Airport. It’s awesome. It goes at about 430km/h during peak times and is super impressive. As of writing this, it’s the fastest public train currently in service on the planet. It’s about 40RMB for a 10 minute or so ride. It’s not super convenient unless you live by the terminal station at Longyang Rd. If I am going to the airport from work (I work near Jinke Rd.) it is great, however from my apartment in Peoples’ Square it is a bit far. 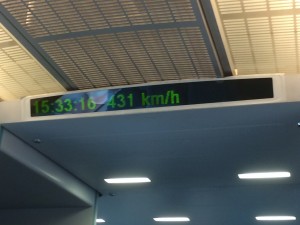 Max speed on the Maglev

Walking
Shanghai definitely is a walking city. Compared to Dallas where virtually no one walks out of necessity, it’s quite easy to walk just about anywhere in the city. You have to deal with garbage, spit, people blowing cigarette smoke, and a host of other annoyances, but sometimes walking even a far distance is the best choice. 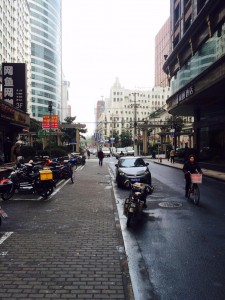 Notice how I did not mention anything about riding a bicycle. There certainly are people who do it in Shanghai, however these people are a lot more brave than myself. Having to weave in and out of traffic is a bit more than I want to endure on my daily commute. I don’t think it is particularly safe for the health of my heart.

Public transportation in Shanghai definitely takes some getting used to, but once you learn the goods and the bads it definitely provides a pretty high level of convenience. Having a flexible position as a software engineer definitely allows for a better experience. I can go to and leave work at times that will help me avoid the rush. I hope this post will help any prospective Shanghai visitor navigate their way around Shanghai.