So after being in Japan a little more than a month I have picked up a few material possessions. First of which is a cell phone. In Japan, cell phones are essential. I heard it was because regular PCs aren’t as available to the Japanese teenager, but it seems that everyone uses their cellphone to email. Every girl that I’ve met with always asks me for my keitai mail (cell-mail), and I get way more messages than I did on my US phone.

A couple weeks ago I went with Shieri and Levi to pick up a cellphone. The first place we went to sold cellphones from all carriers. Talking to the other interns, it appeared that Softbank was the best value. However, when I went to the store, I was told that I would have to pay 70,000 yen up front for even the cheapest phone, and the monthly bill would be quite high. Asking the sales clerk, AU seemed to be the best bet as far as costs went. I didn’t have to pay for the phone up front and I could split it up over 12 months.

We actually decided to go to the AU-only store, as it had a better selection. One thing to note, cell phones in Japan are expensive. I think I am paying about 5000 yen a month for 120 minutes and a moderate amount of packets. Granted, that is probably just the right amount, I remember paying about $40 a month in the US for 400 minutes.

The application for the phone was fairly painless. I got to practice my Japanese quite a bit while Shieri helped the less Japanese-savvy Levi. A few signatures and hanko stamps later I was the proud new owner of a Sanyo Passport for AU. The cellphone is very nice. The screen is a lot longer than most US phones and there is even an antenna that can pick up broadcast TV specifically for phones (for free). The Japanese smileys are also very crazy.

Last weekend during the concert Marco secretly took a picture of my phone while I was on the train, and it actually came out quite well. 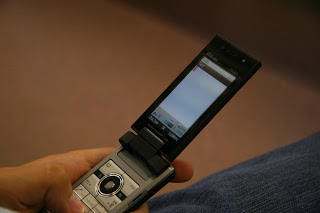 Marco caught me writing a mail. I feel like such a teenage girl.
The second thing that I have bought is a bicycle. A bicycle is by far the best investment that I have made in Japan. Everyone rides a bicycle. I decided to buy one at SATY (Walmart of Japan) so that I would no longer be a stinky pile of sweat when I went to work every morning. So anyways I went to the bicycle department and the Japanese sales clerk greeted me in broken English. I then started to talk in Japanese and asked him which the biggest bike was. (いちばん大きなじてんしゃはなんですか）. He referred me to a bike that was about 14000 yen, so I decided to buy it. This is where SATY differs from Walmart. He then proceeded to assemble the bike for me, made sure the tires were full of air, and even told me to ride the bike down the isle to make sure it was satisfactory (service in Japan is so great).

He also asked me where I was from in America and I decided to say Texas this time around (where I go to university). When I said this his eyes seemed to have lit up. He aparently was a big fan of US Western movies. He mentioned something about Billy the Kid and Clint Eastwood, and I kind of felt almost at home while he was talking to me about this. Anyways, after I paid for the bike I took it down the elevator and rode it home. It has been worth every penny so far. On Monday we went to a sushi restaurant for Lunch, and it would have been hell to walk there in the dead afternoon while it was so hot outside. A lot of people at work are also into Cycling. I like to cycle, but fear that I wouldn’t be able to keep up with them. In any case I look forward to going. 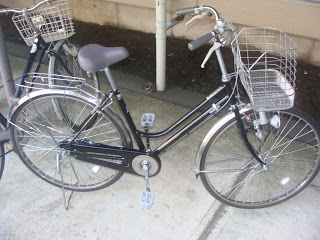 My bitchin’ bike.
The bike is plenty big for me (I am pretty tall). One thing that was new to me was that the lock was ON the bike actually. There is a mechanism on the back wheel that makes a bar go through the back spokes and make it so it won’t turn. I guess this wouldn’t really work in America as people would just pick up the entire bike and throw it in their truck, but according to Randy it is fairly common in Europe. Anyways it is great and I ride it everyone. To anyone coming to Japan long term it is a must buy.

2 thoughts on “Bicycle and Cell Phone”