On Friday I went out with Juan (American), Levi (American), and Mark (Scottish) for a mini “guys night out” deal.

First we just went to the “Cheap Cheap” yakiniku place that is very popular among interns. Didn’t get anything crazy this time around. Last time I got a shrimp which was questionably still alive, but this time all I had was some beef/vegetables, a few beers, oh and yeah, some squid. Afterwards we went to the arcade/game center. It was really fun actually… and really cheap; only about 250 yen for 15 minutes of unlimited play.

My favorite was Windjammers, they had an old school machine that had a bunch of CPS2 and NeoGeo games on it. I also really enjoyed the 4 player arcade Mario Kart. Juan had a big mouth but most of the times we came in neck in neck, and I also beat him once I got the hang of it. 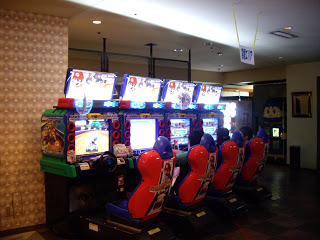 Side Note: I stole this picture from Mark’s Blog.

After that we went to this American bar. It was actually quite American, despite the only American beer they had on tap was Budweiser (shiver). We just had a few beers and then I rode my bike back home through the rain.

On Saturday I went to Maiko’s (a former co-worker) concert. It was a classical music concert and Maiko played violin. It was really refreshing. I hadn’t been to a classical concert in so long, but to be honest I really really enjoyed it. Maiko was of course fantastic and it was really interesting. The concert was out near Odowara which I really enjoyed. It was really rural compared to Atsugi and had a river that went through it that looked perfect for cycling/running.

A group of interns and I are planning to go to Akihabara this weekend to a maid cafe. I’ll definitely take a lot of pictures. 🙂