So the other day I was feeling particularly lazy and ordered Pizza Hut Shanghai. Looking back, over six years ago I wrote about ordering from Pizza Hut Japan. It seems that on that day I was also lazy. Anyway, the big difference with ordering this time around was that this Pizza Hut Shanghai website was actually in English. Also unlike Japan, the pizza from Pizza Hut China was very inexpensive. After quite a bit of deliberation, I settled on the following:

I did not originally want the fried egg, however when I went to checkout they sold it to me at a discount. And what was the damage? Only about 130RMB (about $21 at the time of posting). Definitely an improvement over the 3600 JPY pizza that I ordered in Japan. It took about 30 minutes for it to be delivered after I ordered. As usual, I took pictures. I have to apologize for the picture quality (I was so hungry I just wanted to dig in as soon as possible). 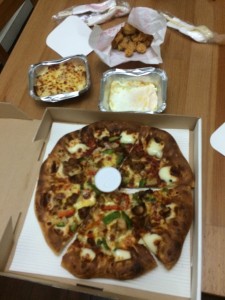 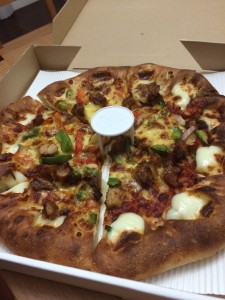 Pizza up close. Slightly overcooked, but not that bad.

So the verdict? Not bad for the price. Truth be told, I prefer the American and Japanese Pizza Hut better, but for what I paid I can’t complain. It’s greasy pizza that makes you feel guilty as hell after you eat it. I can definitely see myself ordering it again on one of those lazy weekdays where I do not want to cook.

Japan. I lived there for a year and continually go back and forth for a mix of business and vacation. Japanese is my second language and it has morphed beyond the casual hobby that it was in college and into almost a part of my everyday life. Last month I went to Japan twice- once for vacation and once for a mix of business/vacation. Back in July I had bought a cheap ticket ($350 round trip from Shanghai) and the following month after I was approved to go to Japan for an embedded conference. Both times were amazing and there must be a tuna shortage in Japan after everything that I ate.

I don’t really know what to say about Japan that I haven’t already said in countless blog posts before. It’s a great country to be. It is clean, safe, free, and the people there are genuinely kind. I won’t go into the level of detail that I do with other travel trips, but instead just post some of the more interesting pictures. 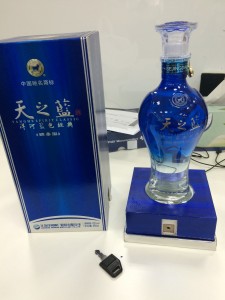 Chinese Rice Liquor – I bought this as a souvenir for a friend. 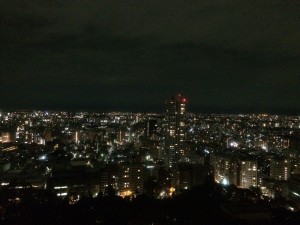 The view from the Hyatt Regency Shinjuku. Not bad- that’s Shinjuku Chuo Park in the foreground. 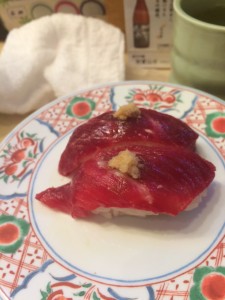 Whale sushi – I had this when I went to a conveyor belt sushi place in Tsukiji (the fish market). I didn’t know it was whale until after I ate it. Quite good. 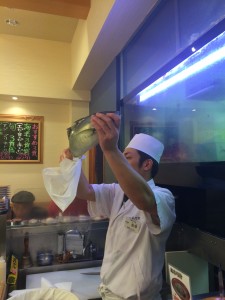 At the same sushi place. At 12pm the chef caught a fish from the aquarium and killed the fish right there to make sushi as fresh as you can get it. 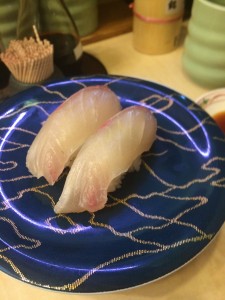 After the kill. Definitely delicious! 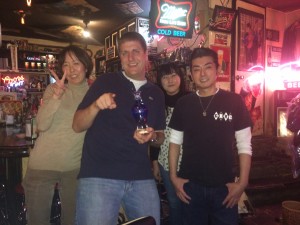 Me at Gina’s with the staff and Rumi. All are friends that I knew when I lived in Japan. 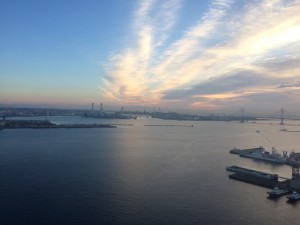 View from Intercontinental Hotel in Yokohama of Yokohama bay. This was the hotel that my company put me at. I stayed at a cheaper business hotel for vacation. 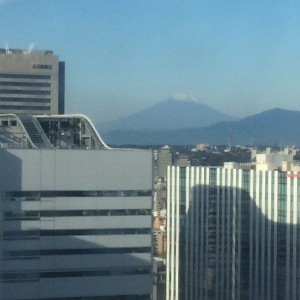 Mt. Fuji. Hard to believe I climbed to the top with my dad almost five years ago. 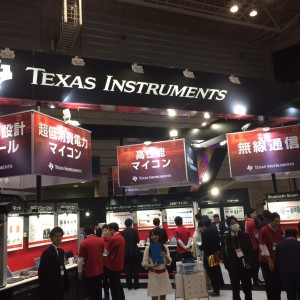 My company at the Embedded Technology conference. All the companies had very cute girls to wave in onlookers. 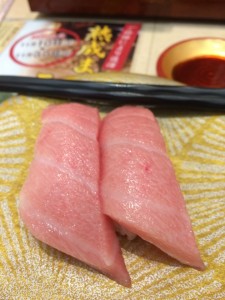 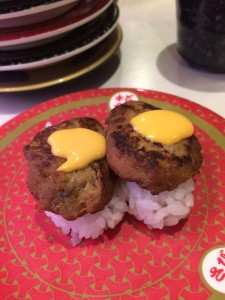 Hamburger sushi I got at a conveyor belt sushi place. I learned later it is normally for kids. 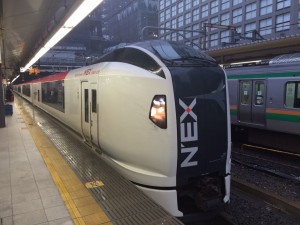 Narita Express that will take you from Shinjuku to Narita Airport in about an hour and a half. Definitely worth the money.

I’ll be back to Japan. Living in China, it is a bit depressing watching/reading the news as there is so much muckraking towards the country. Sure, Japan has it’s problems (every country does), however the news makes it out to be demonically bad. I think most people who actually visit the country from China are surprised on how clean/friendly it is and how it is not the demonic hellhole that the news makes it out to be. I’ll tell you one thing- I definitely have not had sushi that even rivals the freshness that I experienced in Tsukiji market. Traveling there for the fatty tuna alone is worth the plane ticket.