As I write this post, I am sitting in a waiting room on the train platform to catch my Narita Express train to Shinjuku airport. Everything is clean, people around are quiet and considerate, and the entire time that I’ve been in this country (about two weeks this stint), I have not seen one person cough out their lungs on the street. I’ve been able to live in the 21st century and use Facebook/Google/YouTube on a daily basis.

Being in a country like Japan long enough is dangerous. Everything is so safe that you start to let your guard down and this is particularly a problem when you go to a third world country like China. China is the complete opposite- you always have to be on guard for people that want to scam you. When I walk from the train station to my apartment in China, I am approached by at least three different people asking if I want to get a “massage”. This is usually a crusty old Chinese guy and the conversation normally goes something like this:

When this happens, I have had the following reactions:

When I came to China, I always used to default to #1, however I have learned that #3 is actually the best option. If you are too polite, they will just try harder to convince you (same problem with #2). With #4, sometimes they will completely ignore you and continue to speak in English. Option #3 not only makes it clear that you know of the scam, but also that if they continue to proposition you that things can get messy.

Going a little bit deeper into it, any foreigner coming to China should know that even if you want a massage (or a sexy massage), you should never ever say yes to these people. While I have never partook or had the desire for a “sexy massage”, there are many horror stories on the internet about foreigners that did say yes to these people. More or less the common outcome is that they will take you to an unmarked building that appears to be a bar/massage parlor. In these buildings you will start to get a massage in a small room and then two or three Chinese thugs will burst into the room and rob you. There are many stories of people getting charged up to $7000 on their credit cards under pressure that “sexy massages” are illegal in China and that they will report you to the police unless you pay.

What should you do if this happens to you? As I’ve said, I’ve never been dumb enough to say yes to any of these scams, however I can give some advice off some observations. If you’re lucky, you didn’t give them cash and instead used a credit card. Call your credit card company and cancel the transactions immediately and report them as fraud. Any legit card company will foster this and you will not be charged for it. Don’t worry about empty threats from the Chinese “thugs” reporting you to the police if you cancel the transaction. It’s a bluff and there is no way the police would care enough to follow up.

If you paid cash, you’re out of luck and just need to cut your losses. You could report it to the local police, however it is most likely a fruitless effort as the police will most like not care enough (and are also most likely in bed with the scammers). If the thugs demand you go to an ATM, agree, however just tell them to f’ off once you get to the road.

Back to my original point though, staying in Japan too long makes you take for granted how third world China is. It makes you too soft. On the other hand, living in China too long makes it so you are always guarded and makes you too hard. I’d like to say USA is a balance of the two, but USA is really another can of worms. I’m sure it also depends in China where you are, however from the major three cities that I’ve been in China (Shanghai, Beijing, Shenzhen), I can honestly say that the experience has been very similar. This is also of course a foreigner’s experience with limited Chinese. Perhaps I look like an easy target, however I can say that walking down the street at all hours of the night in Japan, Taiwan (I don’t consider Taiwan part of China), and South Korea I have never really encountered the same problem that I do in China.

One of the biggest differences that one will notice when moving from Dallas to Shanghai is the difference in air quality. In summer the difference isn’t too noticeable, however in Winter there is something that makes the air quality significantly worse. Honestly I have not really bothered to wear a mask until last week when I woke up and saw this outside my window: 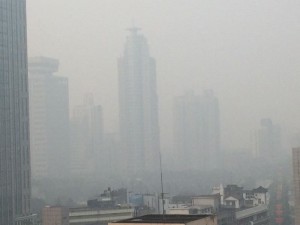 At first I thought it might have been fog, however after a quick trip to my balcony I was able to tell otherwise. I don’t smoke regularly. I might have one or two cigarettes a year (to socialize at bars), but I am by no means addicted or have any sort of craving. When I stepped out on my balcony that day and breathed in however, it really felt like I was almost smoking a cigarette- it was enough for me to put on a mask when I went to work that day.

I really think this is a problem with life in Shanghai. Downtown in Puxi (where I live) it is considered worse, however where I work in Pudong it was also noticeably bad. Another thing that I think is borderline scary is how this affects kids. For a grown 2m tall strong white guy I feel that it is unhealthy enough, but wouldn’t it be that much worse for an infant/baby? To be fair, it isn’t always awful. A few weeks ago from my balcony it was gorgeous/clear and I took this picture (same view as the one above): 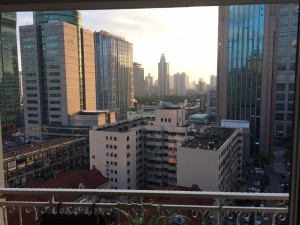 Perhaps I am just used to the constant blue sky and clean air that I had when I lived in Japan/USA. I realize China is a developing country and industrial output leads to this sort of pollution, however I think that since China is striving to become a first world country it needs to take drastic measures to curb this (not only for the environment, but also for livability). In the subway, there are a few people that wear masks, however the vast majority of people elect to breath in the polluted air. Honestly, I am not quite sure how much the mask helps, however the fact that I see black residue on the outside of the mask after I wear it long enough is motive enough for me to be the weird foreigner in the subway that wears it. For any foreigner thinking of moving to Shanghai, I’d definitely recommend buying a pack of masks from Amazon before coming.