Before I came to Shanghai, I did a bit of research on a few places that I could go for a “day trip” to escape the hustle and bustle of the city. I stumbled upon this article from CNN that lists a few “essential” day trips to get out of Shanghai. One of these day trips is Chongming Island. 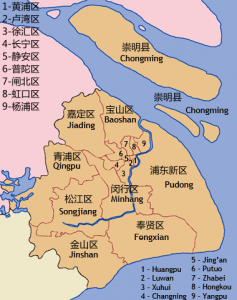 I had planned to go to the island on a couple of different occasions, however the weather would always interfere or something else would come up. Last week at work my coworkers said that they would like to take advantage of the recent three day weekend (Chinese holiday of the Moon Festival) to visit the island and get some fresh air. With the weather forecast good- I no longer had an excuse. My two coworkers Ling and Darren (and Darren’s wife) accompanied me. The plan was to meet up in the morning at 9:30am at Shanghai Science and Technology Station and catch a bus from there to the main city of the island. I made the mistake of going out to dinner/drinking with my Dutch coworker the night before (and inevitably drinking a bit more than I should have), however I was able to meet on-time (albeit a little hung over).

After arriving at Science and Technology Station (the metro stop is a few down from my stop, about 20 minutes), I met up with my friends. We then proceeded to the bus stop and purchased our one way ticket for 12 RMB (about $2). I remember at this point my stomach was acting up a bit (most likely from the previous night’s spicy food), so I took another Immodium and hoped for the best. I also went to the toilet at the bus stop to make sure there would be no emergencies once I was on the bus. The bus stop toilet was pretty dire. In addition to the usual (and very foul) stench, it was also the “Chinese style” toilet that had no seat. It is pretty much just a regular toilet, however engraved into a pit into the ground. I often wondered what an elderly person would do (if their knees were not as flexible)… but somehow I managed. Since I am on the topic of toilets in China, here is some very good advice that I will give to anyone thinking of traveling in China that might stumble upon this blog. If you plan on using a public toilet, bring two things: hand sanitizer and pocket tissues. Pocket tissues because none of the public toilets will have toilet paper, and hand sanitizer because none will have soap.

Anyway, after using the facilities I went back to the bus stop and we boarded the bus after a few minutes. I was hoping that the bus ride would be pretty smooth, but was soon sorely disappointed. I can’t really do it justice by writing it- that bus ride was pretty bumpy even for Chinese standards. The bus stopped and accelerated at roller coaster paces. This coupled with the bad traffic and hungover stomach made for a pretty rough ride. Still, my stomach survived and the nausea subsided. When I wasn’t busy trying to not think of throwing up, the view out the window was pretty decent. We went through a very long tunnel and also a really amazing bridge over the Yangtze River. I would have taken a picture, but (like I mentioned) was a bit distracted. 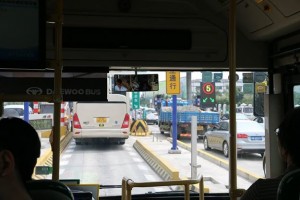 I was able to take this picture without throwing up, which believe me, is an accomplishment.

After about an hour and a half (there was a traffic delay), we arrived. The weather was really nice on Chongming Island. You could see blue sky and the sun was definitely not being shy. Immediately off the bus we were approached by a girl that was selling a taxi service. In China, it is not uncommon for locals in touristy spots to operate unlicensed taxis where they chauffeur you around the area (of course unlicensed). These are called “black cars”. I asked Ling if they are safe and he assured me that if you are with a group you are fine. At the end of the day we paid 300 RMB (about $50) which turned out to be a tremendous deal. While my friends were negotiating the deal, I took a few pictures around the bus station and remembered thinking that there was a lot of trash and dirty looking water. 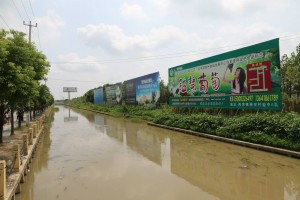 Trashy/dirty river by the bus station

Once in our “cab” (it was an older looking minivan), we told our driver where we wanted to go. At first we were going to go to a place 15 minutes away from the bus stop, however 5 minutes in we changed our mind and instead asked to go to a more scenic area on the other side of the island (about one hour away). Our cab driver definitely was from the area and bared no limits when driving. We were crazy fast (and in case you were wondering, there were no seat belts) and went on the curb/sidewalk to circumvent traffic. Still, he seemed to know the good places and took us to a nice little restaurant on the outskirts of the park that we were going to visit. The restaurant had a variety of different fare, however we opted for the standard assortment of vegetables and local produce. The two memorable dishes were a set of mud crabs and some snails. The mud crabs looked boiled, however they were SO small. They were so small to the point where we substituted them out for the snails (which were spicy and delicious). I unfortunately didn’t take a picture of the small crabs, but they looked like they had at max an ounce of meat. Another memorable note was that they sold bottled water here which I made sure to take advantage of get get a couple. In China, it is more common to down your meal with piping hot water (some weird Chinese medicine about how hot water is healthy for you and cold water is bad), but given the temperature even my Chinese colleagues opted for cold water. 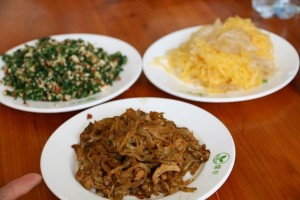 After eating, I had to use the restroom again. This is by far the worst restroom that I have ever used my entire life. There is just one stone pit (no running water) to do both the ones and the twos into. I won’t go into too much detail, but even my Chinese colleagues said that this was terrible even for Chinese standards. After that, we went to the wetland park nearby. As it was a holiday weekend (coupled with the fact that there was no entrance fee), the park was packed with Chinese tourists from all over. The start of the park was a little lackluster. I remember comparing it to the pristine parks that I often visit in Taiwan/Japan and being sorely disappointed. There was way too much trash for such a beautiful park and it was a bit overcrowded. As we got deeper into the park (and it got later into the day), the crowds thinned out and the trash became less, however China has a long way before it can compete with Japan/Taiwan (and truthfully, even USA) on the cleanliness of its public parks.

One common theme of the park was that there were tons of little crabs off the boardwalk. The entire park consisted of a boardwalk surrounded by swamp grass and wetlands (which a few bodies of water sprinkled about). The locals sold these long bamboo poles with crab food attached to the end. The idea is that you place this food right near the crab holes in the mud and the crab grabs it (and gets stuck). You then reel the crab in and place it into the bucket. When I asked Ling what people do with the crabs they catch, he said they most likely keep them for pets until they die (in about a week or so). 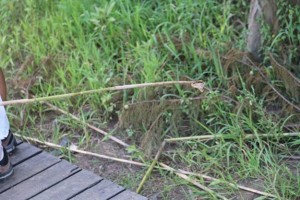 Stick used to catch crabs (the animal of course, not the STD) 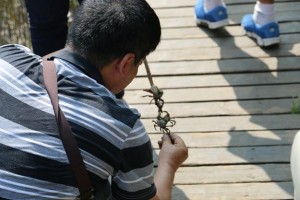 Crab on a stick

Again, like I said the park became a bit more scenic once the day went on and the crowds waned away. There was a very nice overlook where a bunch of stairs led up to. This was a really nice overlook as you got an awesome view of the Yangtze River as well as a surrounding lake. You could rent a boat to go cruising around the lake, however it looked a bit gimicky for our tastes. 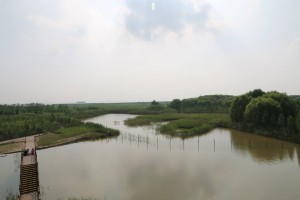 Scenic overlook with The Yangtze in the background

After walking around a bit, we stopped at a coffee shop and ordered a round of cold drinks (I got lemonade and a mango shaved ice) as well as a snack of sunflower seeds. After basking in the air conditioned coffee shop, we set out to go see the Mingzhu Lake. Unfortunately we got there a bit too late (they had stopped selling 45RMB tickets), so we were forced to call our taxi driver to take us back to the bus stop. The taxi driver informed us that he would need about an hour to get to us (he must have driven back to the bus stop), we we decided to walk down a scenic looking road that was lined with trees. 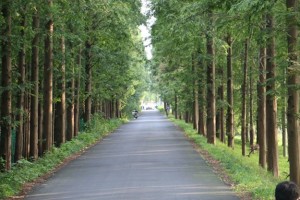 Neat street with trees lining it.

Along the road, we were able to find a pretty posh looking hotel. After the security guard was nice enough to let us inside, we found a great view of Mingzhu Lake. It was very peaceful there and really reminded me of White Rock Lake back in Dallas. The hotel looked very boutique and would be great to take a girlfriend/wife for a weekend trip to escape Shanghai. After looking up the hotel price, it was about 100RMB (about $160)- so expensive, but not completely outrageous. 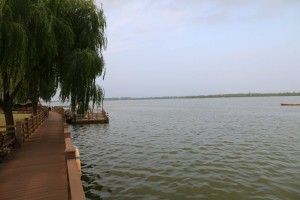 Peaceful Mingzhu Lake by the hotel

After enjoying the peacefulness of the lake, we waited around for our taxi and went back to the bus stop. The taxi driver was even more crazy going back and used the sidewalk to circumvent traffic on a couple different occasions. After an uneventful one hour bus ride back to Shanghai (it was dark at this point so I couldn’t even look out the window), I was completely spent. The bus ride back was actually smooth, however maybe I was just jaded from the bus ride to Chongming. I decided to forego dinner with my colleagues and instead just went back to my apartment and straight to bed.

All in all it was a worthwhile trip. Like I said, China has a long ways to go until it can match the cleanliness of it’s neighbors, however Chongming Island was a worthwhile escape. Looking back at it I probably would go with a date and spend a night in the hotel next time, but the trip was definitely served its purpose as a temporary escape from the big city. The air was definitely cleaner.