One thing that America trumps any other country on is BBQ. Texas has the best beef BBQ and Tennessee has the best pork BBQ. 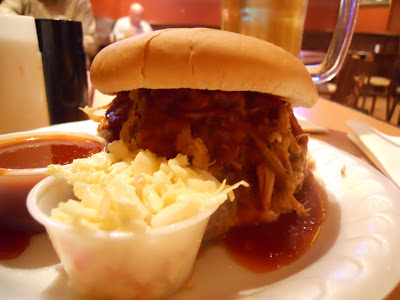 This huge sandwich, some slaw, and a big beer for $9. What a country!

For Thanksgiving Break I am visiting some family that I have in Tennessee. 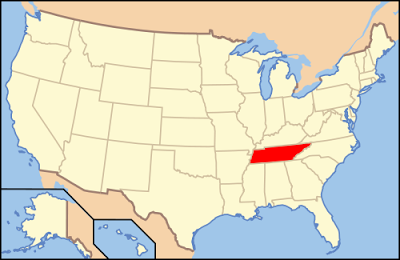 Tennessee is a fairly rural state that has a bunch or beautiful hills and nice country roads. A lot of my family grew up in Tennessee so I though I would visit it for the few days that I get off from university. I have been spending the last couple of days at my Grandma’s house in Columbia, TN. It is about an hour away from Nashville and is a very quiet country town.

The other day I went to my uncle’s house to have some steaks. He lives in a very very small town called Santa Fe, TN. He has a huge yard and also a very nice house. The lot where his house is on is about 17 acres (~70 sq meters) and seems like a very quiet and relaxing place. 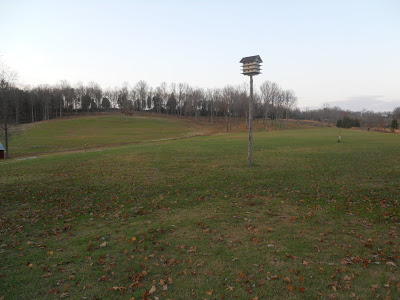 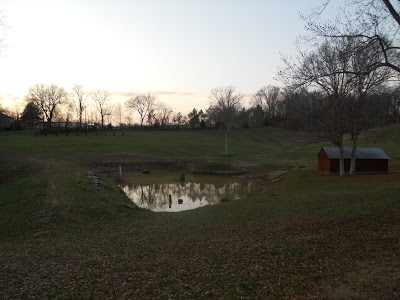 We grilled up some steaks and had a nice dinner with sweet corn from Amish Country and green beans. 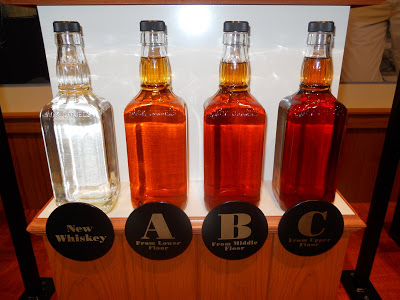 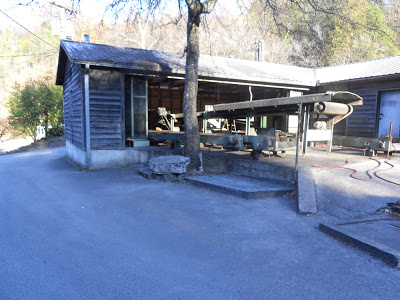 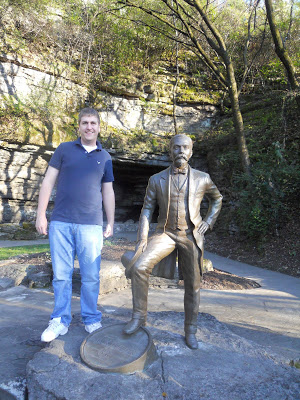 I will post some more pictures once I get back to Lubbock. I have been hanging out with the Japanese exchange students lately and have really been enjoying myself. I sent off all of the application material for a few different Japan programs, so I am keeping my fingers crossed for a reply. 🙂

On Saturday we had the annual end of the year party (忘年会) for my Japanese class. Living for a year in Japan and working at a company at the year I knew all about how parties should be. To be perfectly honest this party was a little disappointing.

The first problem is where the party took place… Hayashi Japanese Grill. When I was going through the earlier classes (before I went to Japan) we held the party at a place called Yamagata. It was by far more authentic. The owners are Japanese and they always made a special menu just for the sake of our party. It was a very relaxed atmosphere and we usually go the entire restaurant to ourselves. Hayashi, however, is a hibachi type restaurant (鉄板焼き）. Speaking from experience, I can say that despite how popular this type of restaurant is in the USA, it is actually quite rare in Japan. It would be appropriate to say that it is “Americanized” Japanese food.

Location aside, the price paid was also pretty steep. $14 got us two sushi rolls, a small bowl of rice and miso soup, a meager portion of hibachi, and also a small bowl of edamame. Novelty aside, I am sure if I went to Yamagata I could get all of this for around $5. Thank god Hayashi had a bar though. 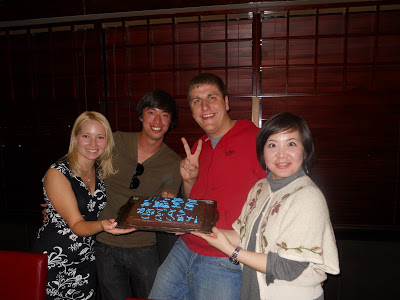 That leads me to my next gripe… there was no alcohol. Anyone that has been to Japan (and isn’t a complete social recluse), will tell you that alcohol is a very important part of the culture. An end of the year party or company party without some form of alcohol is unheard of. Now I know I am complaining about impossible stuff here. This is America and it was a party of mainly college students. Of course the instructors can’t officially endorse drinking due to the fact that we live in a backwards country where the drinking age is absurdly high. Do you know what everyone did though that was of legal age? They started a tab at the bar. Before the party I went to my friend’s house with a few of the other Japanese students and we played drinking games. 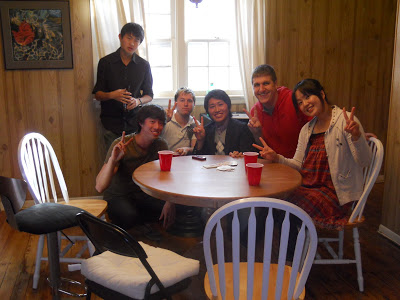 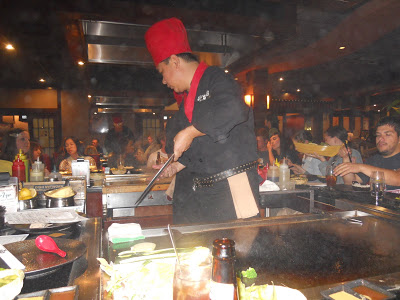 To demonstrate how “authentic” Hayashi was, we spoke Chinese to the chefs. Still it was a nice show though.

I have enough to gripe about with how the Japanese program is run at Texas Tech to warrant another blog post so I won’t go into that here. All of the setbacks aside, I did enjoy talking with the Japanese people at the party. Kumiko, my language exchange, came and we talked quite a bit. 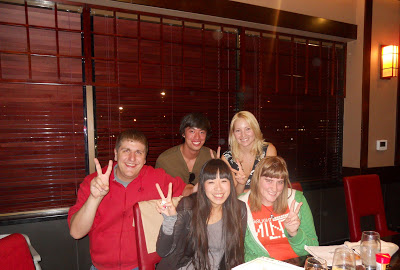 Like I said at this point I am nitpicking. It was really fun and I think that the instructors made the most of the situation. Part of the reason was that my Japanese had far surpassed 95% of the people in the Japanese program. Whenever the instructors spoke they always used dumbed down textbook Japanese. I did have a few good conversations with the other Japanese people though.

Last Friday I went with a bunch of friends to eat some Italian food, got to Main Event, and then go out to a bar to finish off the night. It was really fun and since I had been busy with school this semester. This was a really nice chance to just go chill out and have fun. Next week we get a week off for Thanksgiving, so I really didn’t have too much homework to worry about.

First we went to Johnny Carinos, a popular Italian restaurant in Lubbock. There I got a nice Italian draft beer and also some lobster ravioli. Mayo and Yuki got some nice looking pasta and also a nice bottle of wine. The food was really good and it was nice to socialize with everyone. One of my old buddies from Electrical Engineering came too. When I went to Japan he had graduated so I hadn’t seen much him. 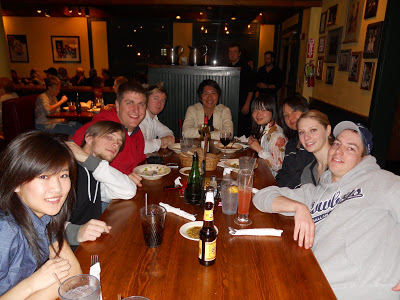 Next we went to Main Event with everyone. At Main Event they have a big arcade, bowling alley, lunar golf, and also a laser tag arena. In Japan they don’t have laser tag so I think this was a really interesting experience for the Japanese students.

In laser tag, you wear a laser pack and also carry around a laser gun. The point of the game is to defend the beacons at your base while at the same time attacking the enemy base and scoring points by shooting their beacon. Usually there are a bunch of defenders and attackers. The arena is dark with strobe lights everywhere. There is techno music playing to enchance the mood too. You have a certain level of health and ammo also. If you run out of either ammo or health, you must return to the energizer on your base and it is replenished. Pretty much it is the closest thing to a first person shooter outside of the army. 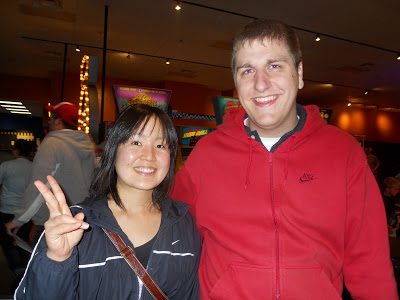 It was really fun! My team (the green team) completely annihilated the other team. I was an attacker and was the second highest scorer on the entire team (35000 points). My engineering friend also scored high with 45000 points. Chiaki scored an incredible 310 points (it was her first time, so it is OK). Yuki and Mayo also scored quite a bit. 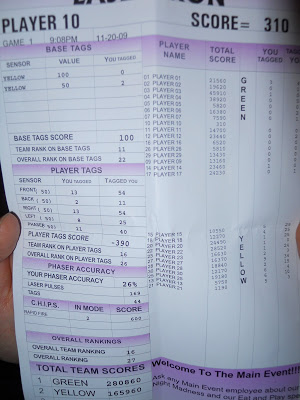 We went bowling afterward (I did terrible). It was a really good night and I had a lot of fun. We also went to the arcade afterward and I won a stuffed bear. I gave it to Chiaki. 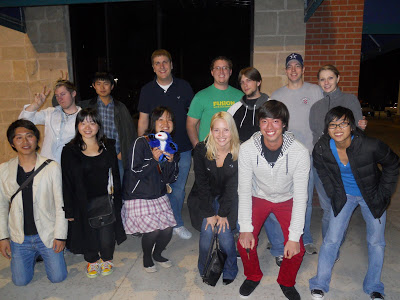 Afterward we went to Bash’s (a local bar) and took advantage of the drink specials. It was nice just to sit down and socialize with everyone with cheap drinks. 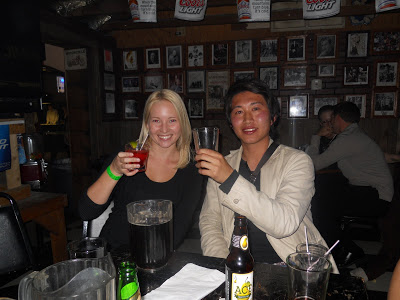 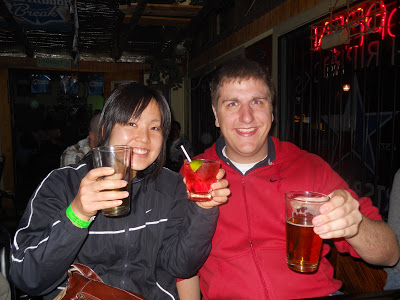 The night was very fun and a nice break from school. I will have to do stuff like this more often.