Uggggh, college would be good if it wasn’t for the class part.

Can I go back to Japan yet?

I saw this clip by an American comedian today that I thought was very funny and also alarmingly true. Nowadays technology advances so fast that we take a lot of thing for granted.

I was thinking about this when I was studying in the library today. Cell phones have pretty much exploded in the past decade. 10 years ago it was very novelty to have a cell phone it seems. In the library at Texas Tech, there is a huge “quiet” study area section with a bunch of large study desks/cubicles. I like to go there to do homework and study. In my room there are way too many things to get distracted with so I go to the library. Today there was some noisy person on there cell phone. You could tell everyone else in the area wanted to murder this person. This is probably my biggest pet peeve ever.

However, this just got me thinking back to this one clip though. 10 years ago we wouldn’t have this problem as that person wouldn’t have a cell phone. Cell phones definitely have their advantages, but it seems in America they seem to make some people become completely inconsiderate of those around them.

Anyway this has just been a random rant that I was thinking about in my head. This clip is really funny and I really like this one comedian (Louis C.K.). If you have time it is definitely worth checking out some of his other stuff.

Despite being in the middle of nowhere in Lubbock Texas, I do make an active effort to keep practicing Japanese and stay sharp. One of the things that I do is write a blog in Japanese once a week.

In Japan, MIXI is the most popular social networking site. I think one of the reasons it is so popular is because it limits its members to those who have a Japanese cell phone. This way a lot of foreigners are automatically filtered out and it can be kept a closed community. Anyway, one of the biggest parts of MIXI is the blog feature. Every week I write about something random (everything from college life to food). Sometimes I get messages from random Japanese people. 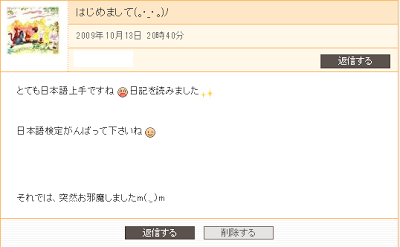 I wish I was in Japan so that I could actually talk to these people in person, however conversing online is the best I can do for now.

I also like to do letter exchanges (snail mail) with my old Japanese friends. I alternate writing letters to them in English and Japanese. I think that writing these letters is much more effective than typing emails on a computer. Writing out all the kanji and taking time to think of the grammatical structures is very beneficial to my Japanese.

West Texas isn’t the type of place that attracts the most Japanese, however I was fortunate enough to meet a Japanese student that is studying English. Her fiance lives in Lubbock so she decided to move here with him. I think that her English abilities are on par with my Japanese abilities so it is a good matching.

I don’t really know what made me think of this, but it is heart-warming to see stuff from your childhood years later.

I used to watch this show all of the time. I remember sitting in a Las Vegas hotel room on a family vacation with my sister watching this.

Not much is new in my life. Just busy surviving in school and applying for programs/jobs that will let me return to Japan after graduation. I have an interview for the Fulbright program on Tuesday so I am excited about that. The JET Program is also about to open for applications so I will be busy gathering all of the necessary materials for that.