Last weekend I went with Randy and Nicola to the seaside with bikes. The weather was really nice and I was exercising so it was a lot of fun. We traveled a good distance. About 43km (about 27 miles). 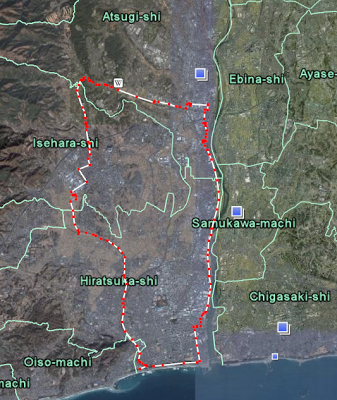 There were some beautiful cycling paths on the way. We went along the riverside both going there and coming back so we got to see some really pretty landscapes.

The ocean was really nice. It was tranquil and peaceful. There was something calming and settling about just sitting there on the seawall, watching the waves crash down. 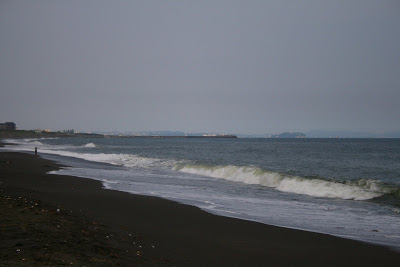 Randomly when we were coming back we found a go-karting place by the river. Randy and I decided to give it a go while Nicola stayed back to take pictures. After grabbing a quick dinner at a local ramen shop Randy and I suited up. The guy explained the rules to us (in Japanese) and we were off. 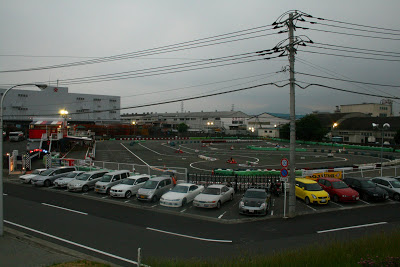 Japan doesn’t mess around with go-karts. They were a lot faster than the ones we had in America. We had to wear gloves and also a helmet. I guess in America there are a lot of lawyers so you can’t have them go as fast. 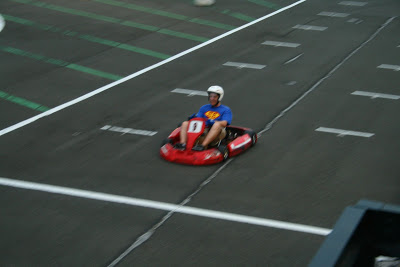 Overall it was a good day. I forgot to wear suntan lotion so I got a little burnt, but nothing too bad. I could see myself going carting again.

One of the main reasons I was so interested in finding an internship in Japan is that I wanted to learn the Japanese language. I could have easily got an internship in America that payed double, but I chose this internship for the cultural and linguistic learning opportunities.

Sometimes I am a little surprised that some foreigners in Japan don’t even make an effort to learn Japanese. I figure if you live in Japan, you should speak Japanese (or at least try to). In America some people get mad when some Mexican or Chinese person speaks no English, and I’d imagine such people exist in Japan also.

I just figure that this is such a good opportunity, it would be a waste not to try to learn Japanese. I want to get all that I can out of this internship both technically and culturally. I’ve highlighted a few of my Japanese study habits that I have picked up in hopes that other people may find them useful.

Kanji
Ahh kanji, the juggernaut of learning Japanese. For those of you that don’t know kanji are Chinese characters that the Japanese language borrows… there are tons of them and they all have different multiple pronunciations.

The best way I have found is just to read print, look up the kanji you don’t know in a dictionary/DS, and write them down. Do NOT use rikaichan. It may be convenient, but it does not help you learn kanji. It is like god mode in Doom.

Recently I have been reading a newspaper. Newspapers in Japan are crazy… they are a different type of language. They are very scholarly and have many kanji that even native Japanese have problems with. Nonetheless it is a good way to practice all different types of kanji. Usually reading the same article more than once is a good way to memorize kanji. It doesn’t have to be a newspaper though. Sit down with a notebook, dictionary, and your choice of Japanese print, whether it be a newspaper, manga, magazine, whatever.

One good thing about reading is that you start to recognize the kanji you learn everywhere. The other day I was reading a newspaper article about the new flu, 新型インフルエンザ. I didn’t know the kanji for “new type” (新型) or (しんがた) so I wrote it down. The very next day when I was coming back from the grocery store I saw a Nissan billboard for the 新型ムラーノ (The New Murano). It just goes to show how useful studying kanji is.

Speaking
Living in Japan provides the greatest facet for learning how to speak in Japanese; everyone knows it. Speak every opportunity you get.

Vocabulary
My study habits for vocabulary are pretty much the same as my habits for kanji. I carry around a small flash card book with vocab words and their translation. Every time I hear or read a word that I don’t know I find out the translation and write it down in this book. Later I can easily review the new words.

It is also the same as grammar. Go beyond the simple stuff. Once you have learned a certain level of Japanese it is easy just to stick with your known vocab… but in order to really master the language you have to go beyond this level. Make it a point to learn and use new words.

That is pretty much all that I can think of right now. I still consider myself extremely lucky for having this internship. Back in America I know people that would kill for a month, let alone a year to be Japan. I really want to make the most of it and learn as much as I can.

Anyone living in Japan for an extended period of time may be interested in the various facets of exercising that are available. Even if the food is healthier than American food, it does little if you don’t exercise to burn those extra calories.

Gym memberships in Japan are expensive… to the point where getting a one year membership in my mind isn’t quite worth it. Perhaps if I was living here for longer than a year I would be inclined to, but there are many free alternatives.

I run with a few foreigner friends at a local sports park. Since I can’t be bothered to wake up extremely early before work, I go after work at about 8pm. Of course it is pitch dark but since this is the only time it cannot be helped. The sports park is free and has a pretty decent dirt track which is roughly 1.5km (0.93 miles). 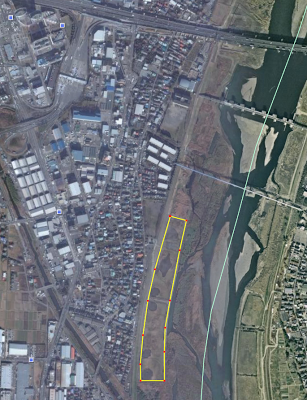 Since I work with a lot of Europeans I always get left in the dust, but slowly I am gaining endurance. Running in the dark is interesting and I can only imagine what a Japanese person running on the track would think if they saw several large gaijin running at them in the dark.

I especially like it since it is by the river. I get to turn on the Rocky music and get pumped up. Anyways besides running I lift free weights in my room. Japan is pretty friendly when it comes to free outdoor places to exercise. There is also a sports gym closer to the station which is 300 yen per day, and has all the standard basketball and tennis courts of a regular gym (along with a nice big pool). I’ve lost about 20 pounds since coming to Japan and hopefully can get to a weight that I can maintain when I get back to the states in August.

Time for some catch up of what happened over golden week.

I went out with my friend that was visiting from America and a couple of Japanese friends from work to a local food festival in Atsugi. Unfortunately it was raining pretty hard so we all had to huddle under an umbrella the entire time. The festival was held in a local Atsugi park. There were tons of food stands set up and also a stage where local dance groups from local high schools were performing. Besides the rain it was a great environment.

The lines for one stand were really really long, so we decided to try one of the shorter ones. It was called a Zerry Fry (ゼリーフライ) and was kind of like a breaded fried potato. It was from Saitama, a nearby prefecture.

There were a lot of people dressed up in animal uniforms promoting all of their stand’s food. Chuck was kidpapped by a cow and extorted into buying some fried potatos which were actually pretty nice. 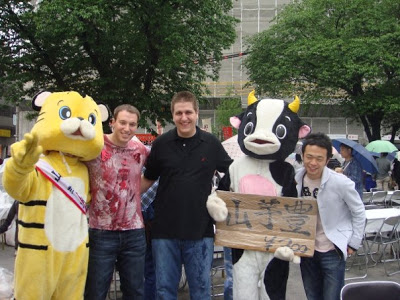 Afterwards we all went to play billiards. It was Kozasa-san’s first time playing billiards but despite this everyone seemed to have a lot of fun. 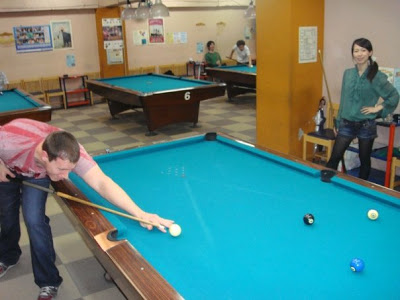