The other day at work after lunch I got an email from one of the office ladies.

Apparently someone dropped 50 yen by the vending machine and she was sending out an email to the entire floor saying that if anyone wanted to claim it to go speak to her. 50 yen in the rough equivalent of 50 cents so this email really shows something about Japanese culture. In the USA, anyone would just pick up that 50 cents and not feel guilty about it.

I guess this type of thinking is one of the subtle things I will miss when I go back to America.

Last year Levi and I got a membership to Costco. Costco in Japan is actually very similar to Costco in America. The membership cost 4000 yen (compared to $50 in the States) for a gold membership. The only thing is that in Japan, none of us have a car to haul everything back.

The closest Costco is in Tamasakai, about40 minutes away from Hon-Atsugi by train. This means we have to bring a huge luggage container to Costco so that we can easily haul everything back through the train with ease. The first couple of times we went, we bought beer and had to carry back the heavy cases through the train, lately we have wised up and only got stuff we can put in the luggage. 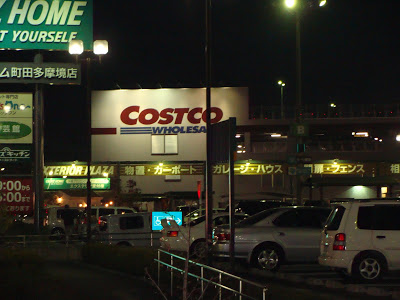 This last time I went with Levi and Kozasa-san (my language exchange from work). Kozasa-san I think was a little overwhelmed with everything. With those who aren’t familiar, at Costco you have to buy everything in large quantities. For example, you can’t just buy 200g of ground beef, you have to buy 1kg (which I did). SO I think for her it was really fun seeing all of these imported foods in huge quantities. It was also I think weird for her to see everything all together in the same room Kitchen appliances, food, books, games, clothes; Costco had it all.

One thing that I particularly liked about Costco is the bakery. You can get really big and delicious bread/muffins/bagels for really cheap. The big twelve pack of muffins only cost about 800 yen.

Other than that I just got a lot of snacks and food to last me through the month. I forgot to take a picture of all the stuff we bought, but here is a small breakdown of everything and the prices: 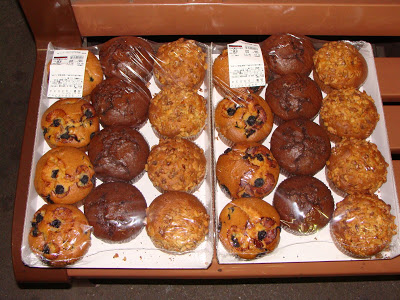 There are a bunch of other things too that I am leaving out, but generally everything was really cheap. When we bought beer it was about 3500 for a 24 pack of Corona and 2000ish for a 24 pack of Asahi. They had a good selection of import beer including Coors, Grolsch, Heineken, XXXX, and a few other European beers. 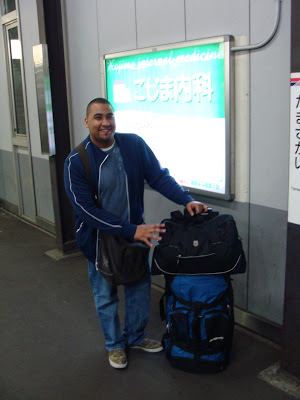 Afterwards we went to Red Lobster that was near by. Red Lobster is pretty much the same as it is in America except that it didn’t seem as popular when we went. Granted that it was a Tuesday night, there were only a few people there and business didn’t seem to be booming. It was also really expensive. I dropped about 3000 yen on my dish. I got a nice variety plater that was delicious but hard to eat. Kozasa-san got a lobster dish and Levi got a steak. 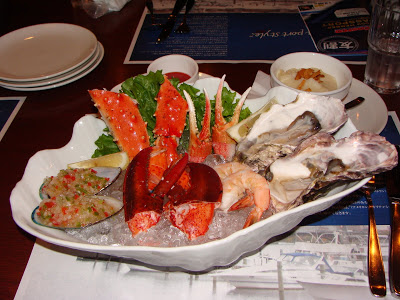 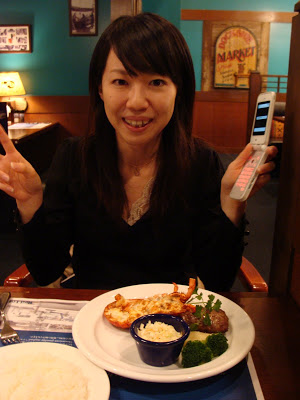 It was a really good night and I got a lot of cheap stuff that will last me through the month. We go to Costco about twice a month now and it really saves money in the long run. If you are in Japan for an extended period of time it is definitely worth getting a membership.

On Saturday after all of the festivals I went out with one of my Japanese co-workers (Katagiri-san) to meet with his Otaku friends. His friends wanted to see what foreign otakus were like and apparently I was one that fit that description. First, for the Japanese impaired, “Otaku” pretty much means someone who really likes anime/video games/etc. I often talked to Katagiri-san about this sort of stuff, and I’m sure he’s seen that in my music collection I have tons of anime/game music, so I must haveve fit this description.

Anyways I met up at around six in Ikebukuro with Randy and Marek. After walking around for a little bit and enjoying the great weather we met his friends at an Izakaya. Katagiri-san previously mentioned that all of his friends were girls, which made the entire experience even more interesting.

It Izakaya was a small quaint little place. Throughout the night we ordered various food and drinks. His friends were very interesting. It was really interesting getting to talk to a different social group and really networking. All of this otaku stuff that I usually hide when I am around girls was really fun to talk about to people with common interests. 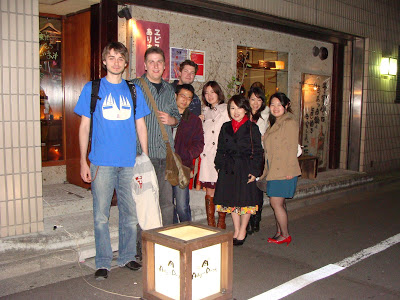 At about 11pm we called it a night and returned to Atsugi. After a number/email exchange change and an hour trip back to Atsugi I passed out in my bed. It had been a long good day.

**WARNING** This post contains pictures that are not safe for work. You have been warned.

From Atsugi, it took about an hour to get to Kawasaki-daishu where the festival was taking place. After a quick lunch at McDonalds we headed towards the temple. Right from the train station it was obvious that this festival is very popular amongst foreigners. There were so many different types… Russians, Australians, American…

Anyways as we walked down the street to the temple we apparently caught the parade. The parade was really interesting…. basically a bunch of people holding platforms of penis statues marched down the street singing and chanting. 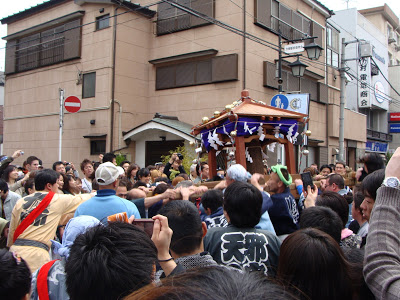 The biggest penis statue was a pink one with all transsexuals holding it. Apparently the festival originated to promote safe sex among transsexuals, but the meaning expanded over the years.

The temple was gorgeous although crowded as hell. It was really hard to walk around and buying stuff was hell. They sold these penis lollipops that were extremely popular. We all gave money to Steve and told him to go buy a bunch of them as it was easier than all of us buying them individually. About ten minutes later Steve emerged from the crowd of people with a handful of penis candy. 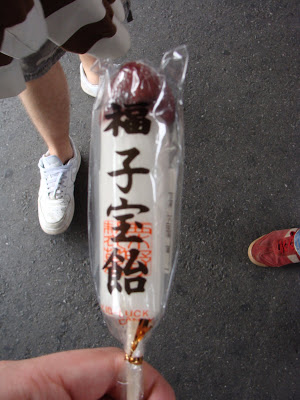 There were these big wooden penises too that you could sit on and have your picture taken. It was really funny and people were really getting into it. Given this chance may never have reach me again, I decided to get a picture. 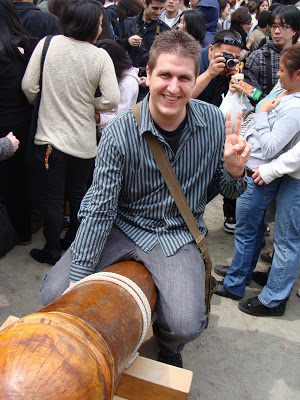 Afterwards I headed to Yokosuka to the American Navy base. They were holding a huge cherry blossom festival and were allowing everyone to come on base and celebrate. It was extremely popular among the Japanese. There were thousands and thousands of people. Honestly it was way more crowded than Comiket or Tokyo Game Show.

Anyways, after waiting in line, getting our bags searched (where they found penis candy) we were on base. Levi and I had come from the Taco Bell (they can’t be found in Japan), but we were devistated to hear that it was blocked off and reserved for military people only. Still they had a ton of American food and beer there and the environment was really nice. It was in a gorgeous area also and the weather was relatively decent. 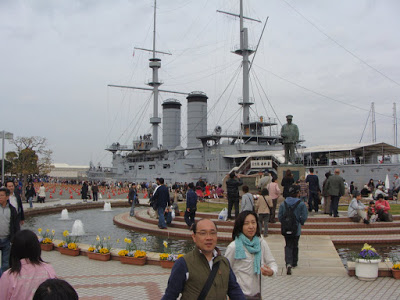 All in all it was a good weekend. After the base, I went with a few people at work to an Otaku drinking party that I will write about in my next post. I am trying to do much more outdoors stuff since the weather is getting better. I have a lot of good stuff to write about.