Today I went with Randy to go cycling to the seaside. It was a more spur of the moment decision, but I needed the exercise and I just needed something free to do on a boring weekend. We left at about 1pm and just cycled straight from Atsugi to Hiratsuka. It took about an hour or so and we wasted a fair amount of time just walking around the beach. 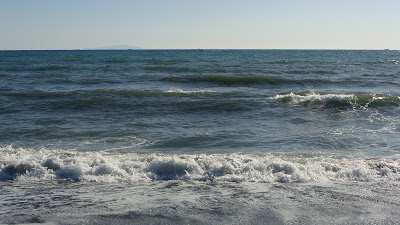 The pacific ocean. Somewhere on the other side of that is home. 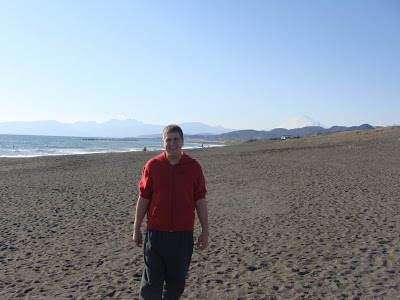 Me with Mt. Fuji in the background.

It was very fun. It was a very nice day so you could see Mt. Fuji very well. Overall the trip was healthy, nice, and free. It is really amazing how you can go from really modern and urban environments to very peaceful countryside cities in Japan. The whole trip took about three and a half hours.

After catching a train to Higashi Ginza Station with Boris and Steve, we met one of Junko’s British friends. The Kabuki theater itself was very beautiful. The architecture was really traditional and it was neat to see such and old and very Japanese building surrounded by new, modern Tokyo buildings. 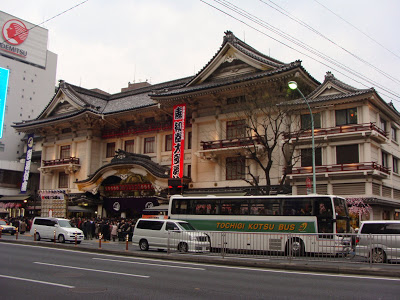 After standing in line for about twenty minutes and paying 900 yen for a student ticket we entered the theater. Luckily there were English narration radios available that we used. The radios/earphone rental was about 400 yen and thank god it was there. Talking with Japanese friends, the language is hard enough to understand for native speakers, let alone my elementary Japanese skills. Since we arrived a little bit late we were only able to get standing room. 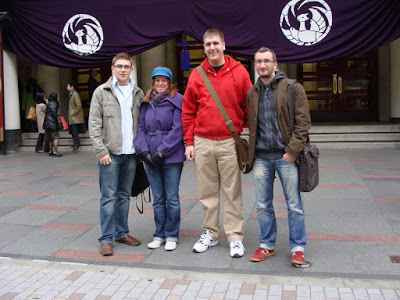 One interesting thing about Kabuki is that all of the performers are guys. Even the women characters are played by guys. Traditional Japanese music/song played all throughout the play. The story was a love story that ultimately was a tragedy. I am not going to explain it too much, but it was very interesting and I am glad I went there. Thanks to the translator I was able to understand the main points of the story and enjoy it to its fullest. Overall it was a nice cheap traditional activity to do in Tokyo.

Afterwards I headed to Odaiba with Boris and Junko’s friend to meet up with Junko at the Ooedo Onsen. Before the onsen we decided to walk around a popular shopping center in Odaiba (Venus Fort). In the shopping center there was some sort of NFL cheer competition going on where a bunch of cheerleaders from different NFL teams cheered and answered questions. It was kind of refreshing in a twisted type of way to hear a valley girl accent again. 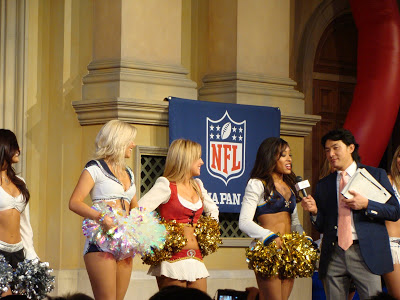 Next we headed to the onsen. An onsen (hot spring) is a very big part of Japanese culture. This one was really nice. Again it was nice seeing such a traditional Japanese building in the middle of modern Tokyo. I found the sign outside to be funny as it explicitly forbade Yakuzas. It also prohibited people with tattoos, but that was acceptable. 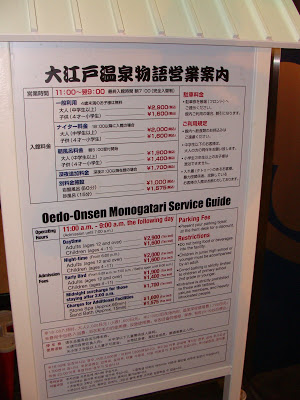 After entering the Onsen we dropped our shoes off at a locker and then paid the entrance fee (2000 yen). After paying we went to the Yukata table and I got a yukata. Surprisingly, they had yukatas for 195cm tall people and it fit very well. Next Boris and I went to the mens’ changing room where we put on our yukata (with boxers on underneath). With the yukata on we headed to the common room.

The common room was really nice. Everyone was wearing a yukata and was barefooted. There were a bunch of restaurants, souvenir shops, and mini-bars set up and it was very open. Everything was also very Japanese: the souvenirs, the architecture, and all the food was Japanese. When we checked in we were given a locker key. Attached to the locker key was a barcode that you used whenever you wanted to buy something inside the onsen. It was a really nice system. You were even able to buy massages and entrance to different types of spas.

After hanging around the common room Boris and I headed to the actual hot spring. We went into another changing room where we were given two towels (a big one for drying and a little one for privacy). After putting the rest of our clothes in the locker we went to the hot spring. I guess a lot of people are uncomfortable being around a bunch of naked men, but to be honest I didn’t really think it was a big deal… it is part of the culture. In the onsen there were a few different bodies of water. The way you are supposed to do an onsen is to first wash yourself in the shower, then take a soak in the bath, and then shower again before leaving. The bath was huge and separated into a few different parts. All of them had stones lining them and looked very nice and traditional.

Boris and I liked the outside open-air onsen better. The water was hotter, the landscape was nice, and in general it was just more enjoyable being under the open sky. In the inside onsen there were a few jacuzzi style onsens that looked nice, but I didn’t actually go in them.

After staying in the onsen for about an hour we headed back out to the common room and met Junko and Shauna. I had a really tasty bowl of udon as well as a couple of beers and a bottle of nihonshu (sake). We spent a couple of hours talking and took a few group pictures (in the common room everyone is clothed so it is allowed). After we were done we got changed into our street clothes and then checked out. All the food and drinks that I ordered came out to about 2500 yen which was a really nice deal.

Overall the onsen was great. It is a must go to anyone visiting Japan. It was really relaxing and overall was a great experience that helped me relieve a bunch of stress.

So Mark (Scottish) left yesterday. It is really a strange feeling having all the older interns leave and being left with somewhat seniority status, but I guess it just comes with the job. To see Mark off we held a surprise party for him in the Youth Heim common room.

Like I mentioned in my previous post, Levi and I recently got a Costco Japan membership. One good thing about Costco is that the little eatery inside Costco sells American pizzas (the same ones that they have in Costco America). I’ll make an entire post about Costco later, but right now I’ll just talk about the party/pizza. So for the party we thought it would be a nice idea to get beer and pizza at Costco. Pizza from Pizza Hut costs about 3000 yen for an American equivalent medium and is just really gourmet (see my Pizza Hut Japan post). At Costco, the XL American pizza is 1500 yen, and beer ranges anywhere from 2000 yen (for a 24 pack) to 5000 yen (for a 24 pack of the premium imports). So obviously we wanted to get our pizza there.

The thing is Costco isn’t exactly close. It is about 40 minutes away and two train transfers. Originally the plan was to bring three people to help carry four pizzas, two cases of beer, and one case of cokes, but at the last second Levi bailed on us and Nicola was feeling sick. So in the end only Steve and I were able to go. Getting to Costco was fine. It was coming back that was a pain in the ass. After picking up the beers and pizza at Costco, and wrapping the pizzas in a trash bag so that we wouldn’t get as many weird looks on the train, we took a cab from Costco to the station by Costco (the drinks were heavy as hell).

This is something I don’t want to do again. Don’t get me wrong, I lift weights quite routinely, but carrying three crates of heavy drinks through crowded stations wasn’t exactly fun. At one point I dropped the cokes and said some obsenities in English. Finally though, after much effort we arrived at Youth Heim. It seems that most people liked the pizza. I guess this type is really rare in Japan so it was nice to introduce a few people to the greasy, unhealthy, delicious American pizza. 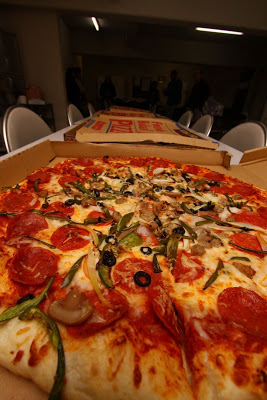 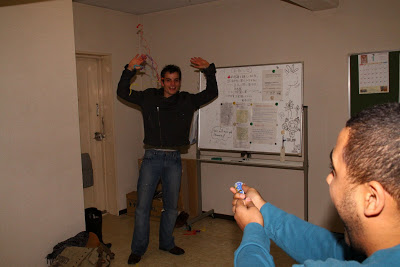 Randy was kind enough to take these pictures (my arms weren’t working after carrying the drinks).

On Wednesday after Japanese class I went with Rumi (the Japanese instructor), Salvatore, Steve, and Levi to eat at a burger place (Crew’s Cruise Burger) close to Youth Heim. It was a pretty relaxed atmosphere and was very American. It was more or less how a bar is in America, however they operated under the guise of a burger shop. I ordered the double cheeseburger (the largest one I was told). The food itself, while the portions weren’t great, was actually pretty tasty. The tomatos/veggies were fresh and the fries and beef were seasoned very well.

They also had a pretty decent beer selection too at not off the wall prices. I had probably 3/4 a pint of Bass Pale Ale for 600yen, and even had a Coors Light for around the same price (beer, let alone import beer is expensive in Japan). The burger meal cost me about 1200 yen. All and all it was a decent place. To put it on American scales think better than any fast food, but not quite home BBQ. I would say it was gourmet for American standards. 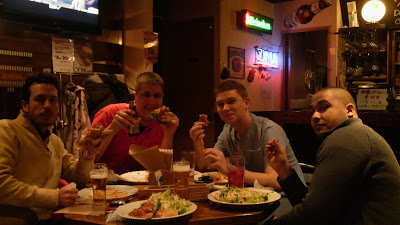 Another interesting thing to note is that I got a Costco membership. At the end of the month (when I have more money) I will write a full blog post about this complete with pictures and an account of my trips to Costco Japan.