I haven’t been updating this as much as I would like to. But anyways, instead of just getting more and more behind I thought I would just do a quick summary of everything that has happened since my last post. This way I can just start new from today and not get any more behind.

My first weekend here I went to Tokyo with Alex(Canadian), Marco(Italian) and Marek (Polish). It was indeed pretty crazy for a first weekend. First we went to Akihabara. For those who don’t know Akihabara is known for its electronic shops, anime stores, video game stores, and maid cafes. We really just walked around for a while looking at everything. We didn’t go to a maid cafe, but sooner or later some of us interns are going to go to to one and have a bunch of fun.

Anyways it turned out that this weekend was also a festival weekend in Tokyo. That means that there were a lot of Hanabi (fireworks). We went to the river side to watch the fireworks and they were pretty awesome, hands down better than anything I saw in America.

Originally the plan was to go to a sex fetish party with the other people I was with, but I figured it was a bit too extreme for my first weekend. Instead I went with Mathew (French), Loic(French), and a couple of their friends to Shibuya to this “American” bar. There wasn’t anything American about it, all the drinks/food were very small. I think that was the first time that I hate french fries with chop sticks. Anyways, after the bar we all went to Karaoke and spent the entire night there. It was pretty fun. We spend the ENTIRE night in Tokyo (the last train on my line leaves at 11:50pm) and it was a pretty good experience for my first weekend.

The company held a welcome party for the new interns and also a farewell party for the ones leaving. It was at a very fancy Yakiniku place (BBQ) where you had to take off your shoes before entering the restaurant. Yakiniku is where you just get a bunch of raw meat and get to cook it yourself on a grill in the middle of the table. I sat right infront of Shozakai-san (the big boss) and talked to him about a lot of things including travel, baseball, and America. He visited America last month to Las Vegas and said it was very fun. Shozakai-san was the guy who flew to Lubbock to interview me.

Oh yeah, did I mention that the Japanese love to drink? At this Yakiniku party, everyone was drinking. Everyone always refilled everyone else’s glass, so it was really easy to drunk. Later one we had about 5 bottles of Nihon-shu (Japanese sake). The other American intern (Juan) and I convinced everyone to try an American drink (a sake bomb). Only in Japan can you do sake bombs in front of the big boss and not be jobless the next day.

Anyways, after the yakiniku we all went to karaoke. A bunch of the interns dressed in costumes (they didn’t have any that fit me) and we all spent the rest of the night drinking and singing. I think at one point I was singing SMAP, but I am not quite sure.

One weekend ago we were suppose to climb Mt. Fuji. Instead what happened was that it started raining like hell the morning we were suppose to leave so we had to cancel. Instead we had a huge party in the common room of our apartment complex. Brian brought in some Chinese liqour that was EXTREMELY strong. Anyways we all started drinking and then went out to ramen. At this point I was sobering up a little, but then we went to karaoke. All I really remember after that is singing Motteke Sailor Fuku with Brian. Oh yeah, Brian was dressed as a nurse.

On top of an official farewell party, we also had a farewell BBQ by the riverside. I left at around 5pm with Marco (Italian) and we decided to go to SATY (Walmart of Japan) for some food/drinks for the party. We were the first ones to the party which was pretty alarming because we had no idea where it was on the riverside. After a while though other people came and we started to get food grilling and drinks open. Someone brought fireworks and I remember talking to many new people at the party including Rumi (later to be found out the Japanese sensei). At about 3am we were all pretty full of alcohol and some of the interns (not me, I wasn’t THAT gone) decided to strip and cross the river. Suprisingly, no one got arrested, although Brian did end up doing the landshark D: . I walked home at about 5am with Randy (Dutch) and some of the other older interns and passed out until about noon the next day.

That’s all I am going to really say about the past month. I probably missed a few things but if I go into detail about everything I won’t get anything posted. I WILL start posting on a more regular basis. Right now though I have to get to work 🙂

For the sake of future interns that are coming to Asahi Kasei that are googling desperately trying to find information (like I was), I figure I’d post some pictures of the room. 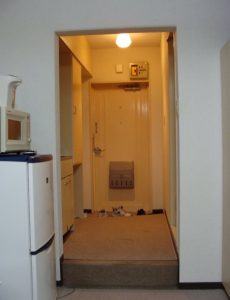 The Entryway. I am so tall that I bump my head on the top between the kitchen and my bed area. Even after being here a month I still do it occasionally. 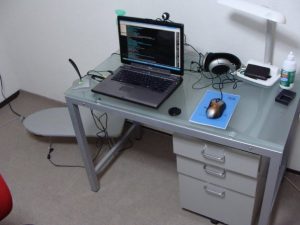 The good ol’ desk. Yeah, not much else I can say about that. 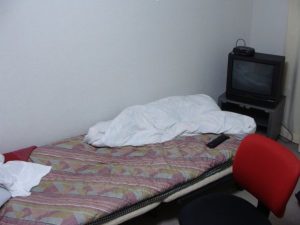 My bed/futon and TV. I am a tall guy (195cm/6’5″), but I can still fit onto the bed with no problem. At first when I came over I had to use the stock pillow. It sucked, it was more like a beanbag… I almost died before I bought another pillow at SATY. 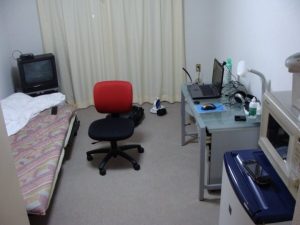 My main living room. It isn’t big, but really it has everything I need… fridge, microwave, rice cooker, bed; I can’t complain. 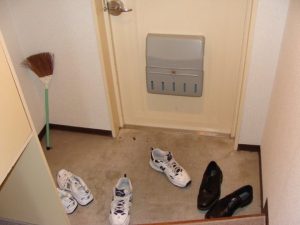 Since it is a Japanese apartment, I have to take off my shoes before entering. I still have to bend down to take them off. Shieri had some insane method of just slipping into the shoes which I have yet to master. 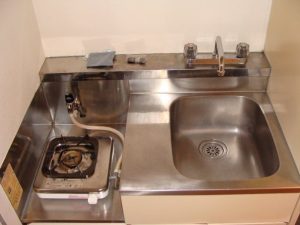 My kitchen. Only one burner, which is really more than enough for me. The tap water in Japan is safe for anyone wondering. 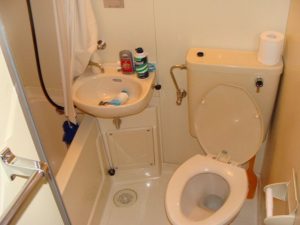 My bathroom. I think my brother put it best when he said something like, “So, you have a space shuttle bathroom?”