This weekend I decided to take a break from drinking/clubbing and do something a little bit more healthy/traditional. I took a trip with Randy (Dutch) to Mt. Ōyama. Originally a few other people were supposed to come with us but they all seemed to cancel due to either being sick or staying up too late at karaoke.

Mt. Ōyama (大山) (translated big mountain) is pretty close and can be seen from Atsugi. I met Randy at the station around 9:00am. After a quick realization that we were the only ones going we boarded the Odakyu line towards Odawara. We got off at Isehara station where I proceeded to buy some onigiri and some water for the hike. We then took a fairly crowded bus to the Ōyama base. There was cable car that takes people to the halfway mark but we decided to tough it out and hike the entire thing.

While the mountain wasn’t exactly huge (1252 meters) I thought the hike was pretty strenuous. It was very steep at points. Imagine a huge stairstepper with hard rocks instead of stairs. Anyways before too long we stopped at the halfway point where there were a couple of restaurants set up. We ate at this soba/udon/ramen place where I had probably the best bowl of udon soup that I have had since I came to Japan. 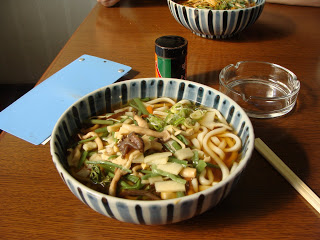 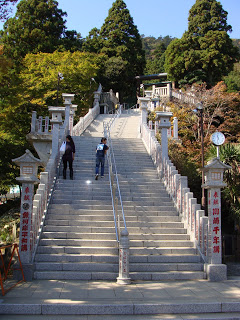 After admiring the scenery we continued on. Right at the halfway point there was a big marble staircase that lead straight to a huge temple. Unfortunately the temple was under construction at the time but it still was neat to see. I even got a pretty decent picture in front of it. 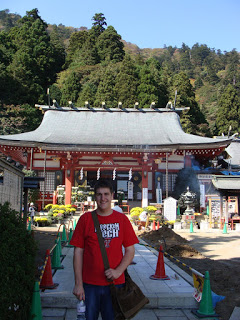 At Japanese temples there are also these arches that are called Torii. Torii can be found at Shinto and Buddhist shrines in Japan and are supposed to mark the entrance from the “normal” world to the “sacred” world. There were a couple of Torii on Ōyama. 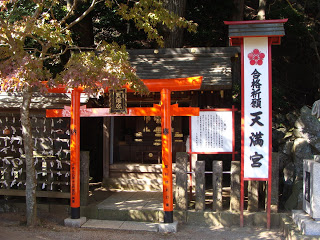 There were also a couple of water fountain type statues. With these statues you give a donation (I gave about 100yen) and then use the spoon on the statue to clean your hands and even drink the water.

After the halfway point the hike got a little more treacherous. One big slip and I could have fallen off the edge and have been seriously injured. There was apparently more people on the mountain than usual. I thought that it may have been because this weekend is a holiday weekend in Japan. Anyways after many breaks, lookout points, and onigiri later we reached the summit. The view from the summit was very impressive. Right when we reached the top a helicopter came and medevacted someone that was injured. I was right below the helicopter when it was hovering in the sky repelling the rescue worker and I got to feel the full blast of air and noise. 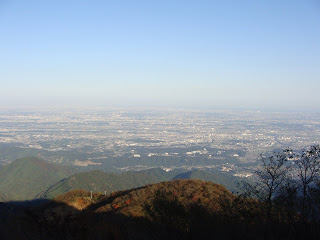 After this we went to get a snack at the ramen/snack shop on the top (the guy working there was surprisingly very rude for a Japanese person). We stayed at the top for a good couple of hours just admiring the view and taking pictures. We seemed to be the only westerners on the entire mountain (there were some Chinese foreigners hiking) which was nice in its own way. The summit was very nice and very peaceful with the exception of the 5 minutes with the helicopter. There were also a couple of nice looking temples on the summit. 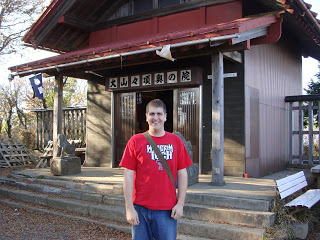 The climb down was a lot easier as far as physical endurance goes. By the time we reached the halfway point though it was pretty dark. Fortunately there were lights scattered along the trail from the halfway point to the base. I had to be very careful and make sure that I climbed down without slipping though. At the base we caught the bus back to the station and then headed to Hon-Atsugi. At Atsugi we stopped at a restaraunt where I had some ramen and fried rice. We both even had a beer to celebrate the ocasion.

It was a very nice trip and I have decided that I am going to do more things likes this. Randy had mentioned that he went with Brian hiking to the Aokigahara last year. I think that this would be awesome to something similar. The newer interns seem like they would be up for this type of stuff also.

Here are the rest of the pictures:

I will post more when I get them from Randy.